Did you have 'gobε' today? – Ghana Business News 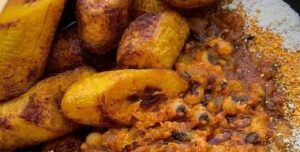 Gobε is a Ghanaian food made of gari and beans, and therefore the name gobε is a combination of gari and beans. This Ghanaian food which is considered highly nutritious is trending on some social media platforms.
It is believed that the trend started when Sam George, Member of Parliament for Ningo Prampram, in an attempt to describe the current economic hardships, said that many of the youth can no longer afford three square meals a day.
The Member of Parliament said a large number of people have resorted to eating gobε as their only meal for a day, describing the situation in a cynical way, he said the youth have developed what he described as formation 0.1.0.
He explained that people are not able to afford eating in the morning, afternoon and evening and so they eat gobε only in the afternoon with plenty of gari which sustains them till the next day.
After Sam George’s pronouncement, which was shared on many social media platforms, with people showing pictures of themselves eating gobε or pictures of gobε.
There are a list of popular gobε joints or eateries, where people are likely to get sumptuous gobε.
Gobε is also known as yor kε gari or “red-red” which refers to the same thing – gari eaten with beans.
Gari is a fine to coarse granular flour of varying texture made from cassava roots. Cassava is cleaned after harvesting, grated, water and starch squeezed out of it, left to ferment, and then fried either in palm oil or without palm oil and serves as a major staple food in West Africa.
In the past, gobε was considered as one of the cheapest foods around even though nobody compromised its nutritional value.
Beans are high in protein and the beans usually goes with a pepper, tomatoes and red oil.
These days gobε is garnished with all kinds of vegetables and spices, for instance people add avocado pear and eggs to gobε, others garnish the food with various kinds of vegetables and eggs.
Usually, lovers of gobε also accompany the food with fried ripe plantains.
A story has popped up online that one Victoria Anyediventor from Adagbledu (Volta Region), is credited for discovering”gobε”.
After Sam George’s popular gobε pronouncements, a video popped up on social media, where an interviewer was asking someone about who is important, a doctor or a banker and the interviewee said it is the gobε seller.
Gobε is fast becoming a favorite of many, one cannot be particularly definite whether to attribute the gobε trend to the MP’s pronouncements or the economy since gobε is believed to be more affordable and filling compared to eating waakye or kenkey.
People report on social media that the queues for buying gobε is increasing.
Some Ghanaian celebrities have also taken to social media to reaffirm their love for gobε.
It is clear that gobε is gaining some really fast popularity and so I ask, is gobε part of your meal formation for today?
By Hannah Awadzi
Source: GNA
Prev Post
Two car snatchers jailed 20 years each
Next Post
Court rules against Arise Ghana request to demonstrate at night
Comments are closed.

Work is not done, I want the world title – Isaac Dogboe – Myjoyonline