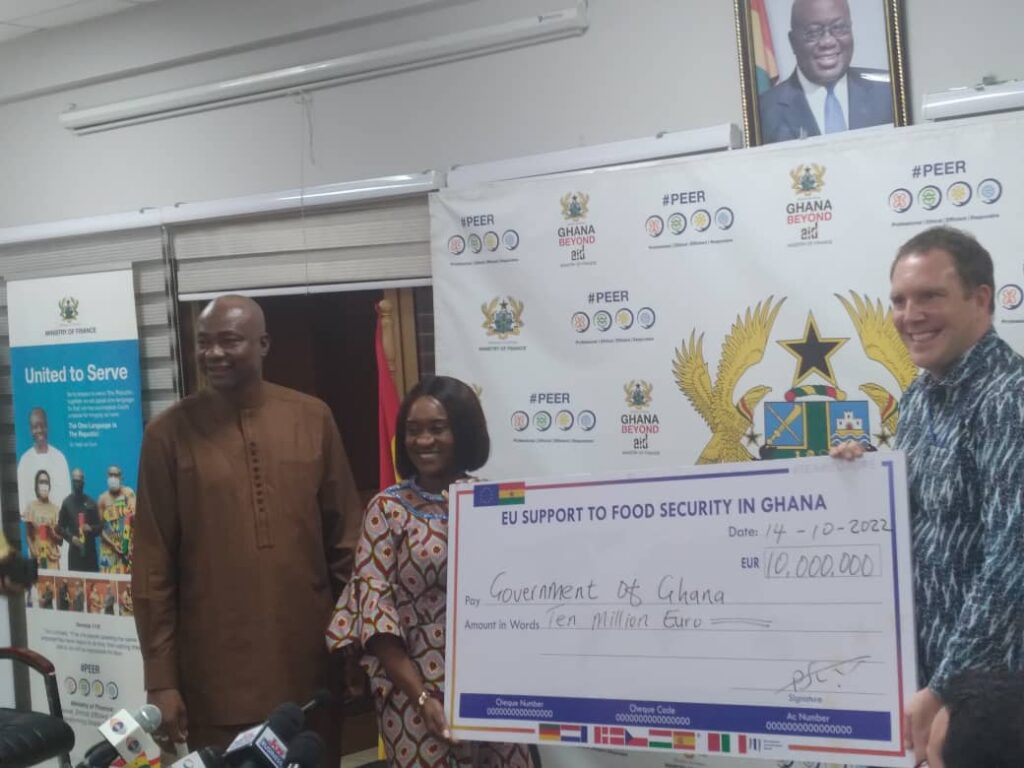 The European Union (EU) has pledged an additional €10 million to Ghana to support the most vulnerable populations facing escalating global food security crisis exacerbated by Russia’s unprovoked and unjustified invasion of Ukraine.
Mr. Pieter Smidt Van Gelder, the Deputy Head of the European Union Mission to Ghana, announcing the new Special Measure in Accra said, “These new funds will support families to grow crops, generate income and improve food availability on local markets.”
Mr Gelder, who presented the dummy cheque to the Ministries of Finance and Food and Agriculture said the EU support would also make
Ghanaian farmers more resilient to crisis by promoting sustainable food production and strengthening integration into national and regional food value chains.
He said the allocation would support the sustainable development of a number of agribusiness value chains, including shea, soybean, beekeeping, and vegetables.
The Deputy Head of the EU Mission said this would complement efforts by the Ghanaian government to mitigate further increases in poverty, hunger, and malnutrition in vulnerable areas affected by high prices of food, fertilizer, and fuel.
He said the current €10 million allocation to Ghana represented the commitment of the EU and Member States Team Europe approach to mobilizing political, policy and financial means to safeguard food security, while transitioning to more resilient food systems.
He said the food security situation was a very serious concern and that was why the EU had allocated 600 million euro to countries mainly in Africa to finance humanitarian food aid and food production and to strengthen local food production systems.
He said the support would help 19 countries to cope with the consequences of Russia’s war of aggression against Ukraine, notably the current food security and related economic shock.
“Of this envelope, the EU is allocating the €10 million to Ghana,” he added.
He said the new funding comes on top of the EU’s €203 million joint programming support already dedicated to Ghana for 2021-2024.
The Deputy Head of EU Mission said the extra funding announced today would strengthen the ongoing programme as well as the EU’s upcoming support to the agriculture sector in Ghana.
Mrs Abena Osei-Asare, a Deputy Minister for Finance, said “We as a country have been faced with a number of challenges in recent times. The COVID-19 pandemic and lately Russia – Ukraine war have particularly had worrying effects on Ghana’s economy.”
She said the conflict had resulted in rapid increase in the prices of food, fuel and fertilizer, with its attendant consequences on the country’s foreign exchange reserves used to purchase commodities imported for public consumption as well as inputs for industries.
She said food inflation continued to contribute highly to overall inflation with Ghana’s inflation for September 2022 at 37.2 per cent with food inflation contributing largely at 37.8 per cent.
She said the support would focus on the Northern part of Ghana as a more economically sustainable and inclusive food systems, reinforced environmental sustainability of food systems, enhanced social sustainability and gender responsiveness of food systems (incl. Food and nutrition security) and improved governance and institutional sustainability of food systems.
She said the EU had been a strategic partner of Ghana over the years and had supported the country in the areas of infrastructure development, good governance, agriculture, and public financial management.
“The flexibility exhibited in the provision of €86.5 million to Ghana as Emergency Budget Support during the peak of the COVID-19 pandemic is one that cannot be forgotten,” she added.
Mrs Osei Asare said the support to food security would complement an action for agribusiness foreseen under the Annual Action Programme for 2023.
He said the action was part of a larger support aimed at mitigating the effects of food crisis in vulnerable Member States and regions of the Organisation of African, Caribbean and Pacific States (OACPS), occasioned by the Russia Ukraine war.
“This singular decision by the EU, together with its Member States, to mobilise €600 million from the reserves of the European Development Fund (EDF) to support ACP countries and regions is particularly commendable,” she said.
Mr Mohammed Hardi Tufeiru, a Deputy Minister of Food and Agriculture, said the EU-Ghana Agriculture programme, sought to modernize agricultural production processes.
This will address binding constraints to agricultural productivity through the development of selected value chains including rice, soybean, groundnut, cashew, mango, and vegetables, building resilience against climate change and investment in infrastructural development such as roads and irrigation facilities.
The programme is consistent with Sector’s flagships- Planting for Food and Jobs and Planting for Export and Rural Development.
He said it would go a long way to improve the livelihoods of communities in the beneficiary regions and the country at large.
He said the €10 million pledge by the EU had come at an opportune time to support the most vulnerable populations to cope with the ramifications of the Russia invasion of Ukraine and the resultant impact on food security.
He said the proposed support had been earmarked for the sustainable development of a selected number of agribusiness value chains, including shea, soybean, beekeeping, and vegetables, which are all priority areas for the sector.
Source: GNA
Prev Post
Ghana and four other countries benefit from $250m EBID grant
Next Post
No plans to reduce returns on investments – Ghana government
Your email address will not be published.