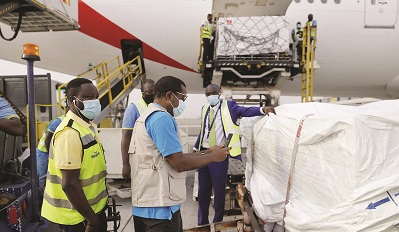 United Nations Children Fund (UNICEF) and Gavi, a Ghanaian institution, on Tuesday received 648,000 doses of the AstraZeneca vaccine from the French government for onward delivery to Ghana to help her fight the COVID-19 pandemic which is still wreaking havoc across the globe.

This forms part of 10 million French doses donated to member states of the African Union. The French government is making these donations as its contribution to combat the virus which is manifesting in different variants.

With the recent detection of Omicron variant in South Africa, months after the Delta variant was discovered in United States of America, Asia and Europe, France is ramping efforts together with the COVAX and AVATT to reach a donation of 120 million doses up from the 67 million doses already distributed.

A statement issued and copied to the Ghanaian Times by Alynda Armoo, Press Attaché at the French Embassy in Accra said “These vaccine donations are particularly crucial as a fourth wave which could be more violent than previous ones is currently feared on the continent. The vaccines are being allocated and distributed through a partnership with the African Vaccine Acquisition Trust (AVATT) and the Gavi-led COVID-19 Vaccine Access Facility (COVAX).

To date, 67 million doses of vaccine have already been donated by France. France wanted this action to benefit African countries first and foremost, and it was in a country on this continent, Mauritania, that France made its first donation via COVAX last April.”

The statement said France was providing its full support to the organisations in charge of deployment, Gavi and United Nations Children Fund (UNICEF) to ensure that the last doses reach the field as quickly as possible.

It continued, “Since the beginning of the pandemic, France has promoted equitable and universal access to vaccines, particularly in Africa. France is strongly committed to helping to accelerate vaccination worldwide, and will donate 120 million doses by summer 2022.”

It said France shared its vaccines simultaneously with its national campaign, as announced by the President of the Republic at the Paris Peace Forum in 2020.

“Since then, nearly 60 per cent of French donations have been directed to 38 African countries. This is a first step, decisive but still insufficient to close the gap between Africa and developed countries in the fight against the COVID-19 pandemic, in terms of access to health products.”

“Our common objective in this regard is, in addition to donations that will accelerate vaccination in the field, to contribute to strengthen Africa’s production capacity and thus enable it to respond, in a sovereign manner, to the occurrence of future pandemics.”

According to the statement, French President, Emmanuel Macron, was among the very first to welcome and support the efforts of African Union member states to set up initiatives like AVATT.

It said in August 2021, France committed to donate 10 million doses of AstraZeneca and Pfizer COVID-19 vaccines to African Union countries.

France has now allocated all of these doses to about 30 African countries and most of them have already been delivered.

France, along with its European Union partners, share the desire of African states to have a pharmaceutical industry on the continent. France is actively engaged in building vaccine production capacity in Africa and is actively contributing to projects to transfer messenger RNA (mRNA) technology to the African continent, particularly in South Africa, Rwanda and Senegal.

facetvnews is a news and entertainment portal. We report nothing but the exact information as it appears. visit www.facetvnews.com/about-us