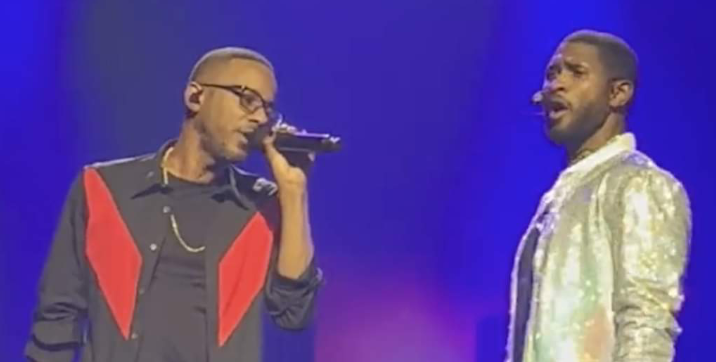 Tevin Campbell made a surprise appearance during Usher’s set at his Las Vegas residency on Sunday night (Sept. 4). The Grammy-nominated singer joined Usher on stage to perform his 1993 hit “Can We Talk,” the lead single from his sophomore album, I’m Ready.

Usher, wearing a sparkling “Dirty South” jacket, gave Campbell the floor to perform the lead parts while he sang a few ad-libs.

Considering the history behind “Can We Talk,” it’s good to see the two vocalists on stage singing it together.

In a recent interview on the State of Black Music Podcast, Campbell spoke about how that song in particular caused friction between L.A. Reid and Babyface, who had signed Usher to their LaFace imprint. (Reid wanted “Can We Talk” to be Usher’s song.)

“Well, that’s true,” Campbell confirmed. “That’s actually true, L.A. did want [Usher] to record it but Babyface wanted me to do it and they had a big fight over that.”

In Reid’s book Sing to Me, he also opened up about the “wedge” between him and Babyface at that particular time. “The worst moment came when Kenny came to Atlanta to record Tevin Campbell on a song call ‘Can We Talk,’ a song I f*cking loved, and the first song he wrote and produced without me. It would have been perfect for Usher, but Kenny brought Tevin Campbell to Atlanta and recorded the song at Doppler Studios in the room next door to where I was working with Usher. That was no accident.”

Reid added, “Usher didn’t understand why Kenny was working next door on this song with someone else. He was confused and hurt. I was crushed.”

On Aug. 26, Usher resumed his residency at Dolby Live at Park MGM in Las Vegas. At the time of publishing, he has ten more performances lined up through the end of October. Due to overwhelming demand, he recently announced 25 additional shows that will take place in 2023.

Usher: My Way The Vegas Residency 2023 will begin March 3 and will conclude July 15. It will mark his third consecutive year with a residency in Sin City. He launched his first residency in 2021 at The Colosseum at Caesars Palace.

In other music news, Usher recently teamed with rap duo City Girls on “Good Love,” which debuted at No. 70 on the Billboard Hot 100 during the week of July 16. It marked his second collaboration of the year. Earlier this year, he joined forces with Mary J. Blige on “Need Love,” a track that appears on her new album Good Morning Gorgeous.