by Facetvnews
in Business
0
0
SHARES
0
VIEWS
Share on FacebookShare on Twitter
ADVERTISEMENT
By Brian Webber: With one massive right hand, Deontay Wilder (43-2-1, 42 KOs) left Robert Helenius (31-4, 20 KOs) in a heap on the canvas in the first round last Saturday night at the Barclays Center in Brooklyn, New York.
Having disposed of the 38-year-old Helenius in his comeback fight, Wilder is now faced with having to decide whether to battle Andy Ruiz Jr in a WBC title eliminator or go in a different direction against perhaps a safer target.
#1 Wilder is now expected to be ordered by the WBC to face #2 Andy Ruiz Jr next in a final elimination, with the sanctioning body to decide a mandatory for WBC heavyweight champion Tyson Fury.
Wilder spoke many times this week about wanting to challenge IBF/WBA/WBO champion Oleksandr Usyk for his three titles rather than fighting Ruiz in WBA final eliminator. But Usyk’s non-appearance at Wilder’s comeback fight against Helenius last night indicates that he will not entertain that match.
“I’d be very surprised if he sticks to his word,” said Wilder about Usyk. “We’ll see what happens. I’m going to keep Usyk to his word. We will be calling his team, and we’re going to see what’s up.”
You can’t blame Usyk for opting not to go in the direction of a fight with Wilder because there’s no title to capture in that bout, and the risk of being knocked out would be high.
Additionally, the money that Usyk can make fighting Wilder is likely far less than what he would get if he were to battle Canelo Alvarez.
“I’m down for Andy Ruiz, or Usyk, or whoever,” said Wilder. “The excitement in the heavyweight division is back. There’s no heavyweight division without Deontay Wilder. That’s a fact.”
To be sure, it would be a big letdown by Wilder to face Ruiz Jr rather than Usyk, but it was a mistake on the Bronze Bomber’s part to have ever entertained the idea of a fight against the Ukrainian.
It was obvious from the start that Usyk casually mentioned his interest in fighting Wilder, and you could tell that he wasn’t serious. The only way Wilder would have a shot at fighting Usyk is if the Ukrainian failed to negotiate a fight with the sometimes difficult Fury.
If Fury were to start giving Usyk the same deadlines to sign the contract that he did with Anthony Joshua, the fight likely wouldn’t happen.
However, Fury likely learned a painful lesson not to set deadlines for his opponents after losing out on a ton of money for a fight against Joshua.
Unless Fury is dense when it comes to brains, he won’t make that mistake with Usyk because the chances are high that he’d end up losing out on that fight too. 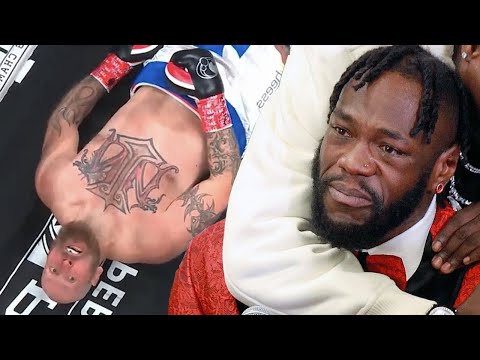