by Facetvnews
in featured, International Sports
0 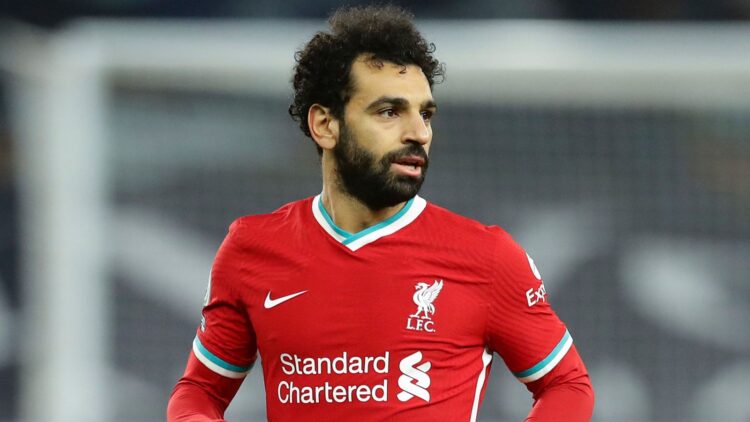 The Reds marksman made Champions League history during the week and will hope to continue in that vein to avoid achieving an undesirable feat
Mohamed Salah’s blank expression after scoring his first and Liverpool’s fourth on Wednesday night reflected the broader mood around the Reds’ season so far.
Twelve minutes later, the Egyptian was all smiles, rooting for Harvey Elliot’s disallowed goal, still undergoing a VAR check, to stand. It did stand, leading to an outpouring of suppressed joy for Elliot, with Salah and Jurgen Klopp understandably elated for the youngster who netted his maiden strike in the competition.
That was Liverpool’s seventh in a dismantling of Rangers, a result that did not reflect the ‘Gers’ competitiveness for an hour before the eventual capitulation.
For Salah, it was Champions League history made. His stunning treble that came within six minutes and 12 seconds had never been done in Europe’s premier club competition before Wednesday.
Despite his broadly reliable goalscoring on Merseyside, the Liverpool marksman’s name would not have been first in line had anyone put forward contenders for that record before match-day four’s games.
Indeed, it has been a slow 2022-23 for the attacker by his standards. His raw numbers before that devastating cameo at Ibrox had him on four goals and three assists in 11 appearances in all competitions but the forward had looked out of sorts and underutilised despite the respectable goal involvement.
A cursory look at Salah’s underlying numbers — and his pressure map this season compared to previous campaigns with the Reds — showed he was spending so much time out wide, making it harder to score goals whilst simultaneously providing width.
ICYMI: Another outstanding Partey performance vs Liverpool & result, to boot, will give credence to the viewpoint that Arsenal are primed to supplant Salah & co. as #MCFC’s main challengers. #ARSLIV @GOALAfrica https://t.co/lbve8Qa6Mf
Perhaps this precipitated Klopp’s post-match remarks, flavoured with humour, praising the team’s best player.
“Different position, more inside,” said the laughing Liverpool boss to BT Sport. “He is an outstanding player; we all know and today he showed it and it’s good.”
Indeed, Salah played more centrally in the 22-minute appearance in mid-week, playing in tandem with Diogo Jota in the Reds’ current 4-4-2, where he inevitably occupied the inside-right channel.
It remains to be seen what Klopp does with his star player when Manchester City visit Anfield on Sunday, especially as Rangers have shown that they are not a fitting barometer of the merits of the German tactician’s alterations.
Salah played out wide in the reverse fixture at Anfield but barely got a kick, and in a similar approach in the next Premier League game at Arsenal last time out, touching the ball 21 times altogether and just one time in the Gunners’ penalty area.
Now, with the team’s leading attacker thriving alongside a strike partner, you wonder if the former Borussia Dortmund boss will give in to that temptation in the hope that Salah picks up where he left off against the Scottish giants in Sunday’s game on Merseyside.
Two goals in eight Premier League appearances tell one story, the failure to find the back of the net at Anfield tells another.
The Egyptian’s last league goal on home turf came in gameweek 38 of the previous season, where he netted in the 3-1 success over Wolverhampton Wanderers that saw him share the Golden Boot but miss out on another league triumph.
On the one hand, the ongoing run is worrying: he has now matched his longest run without netting a league goal at Anfield, an unpleasant record from Liverpool’s forgettable 2020-21 campaign.
However, on the other hand, the fact that he has been on the receiving end of quality chances in those games gives hope to concerned supporters.
With the Newcastle United game an exception, four clear-cup opportunities have been missed in three fixtures — a header in the 1-1 draw with Crystal Palace, a pair of gilt-edged openings in the 9-0 annihilation of Bournemouth and another pair in the 3-3 draw with Brighton & Hove Albion — indicating it is only a matter of time before Salah ends this ongoing drought.
Coincidentally, Manchester City were the opponent when the Egyptian previously went four Premier League games at Anfield without scoring.
On that day, the forward scored from the spot to prevent that run from increasing to five, and he will fancy a repeat in finding the back of the net, even if the attacker will not want to rehash the eventual 4-1 defeat from that encounter.
That hammering was the Citizens’ only league win at Anfield in 19 visits, but the similarities in Liverpool’s decline in both campaigns make Pep Guardiola’s men favourites to record a rare win in the red half on Merseyside.
That is one record the Reds aim to continue on Sunday, and Salah scoring in the process will make a favourable result taste even sweeter.

Teyana Taylor’s ‘Bare With Me’ Is Now Certified Gold