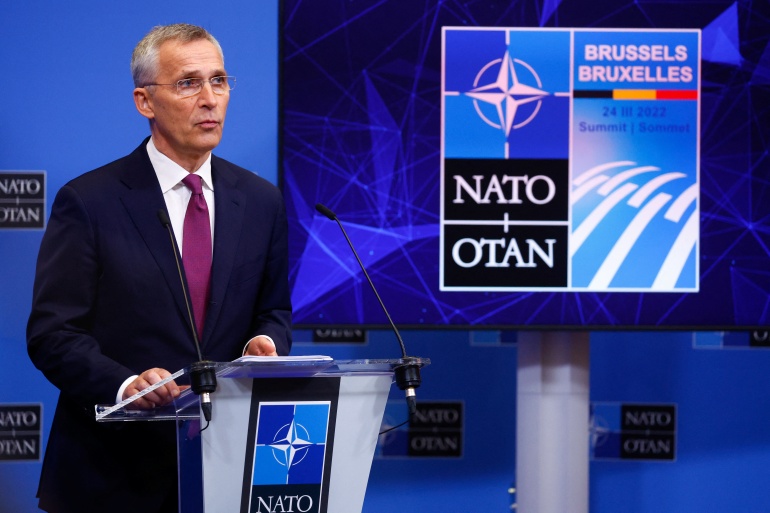 NATO allies have agreed to bolster the alliance’s eastern flank with four additional battle groups and to send further support to Ukraine as it battles the Russian invasion.

Stoltenberg, whose mandate was renewed for a year in response to the security crisis, said the invasion launched by Russian President Vladimir Putin was “the biggest threat to our security in a generation,” to which the alliance must respond decisively.

Stoltenberg, whose mandate was renewed for a year in response to the security crisis, said the invasion launched by Russian President Vladimir Putin was “the biggest threat to our security in a generation,” to which the alliance must respond decisively.

The heads of state of the 30 NATO allied nations announced the approval of four additional battlegroups to Bulgaria, Hungary, Romania and Slovakia, in addition to the four already positioned in the Baltic countries and Poland.

NATO will also bolster its eastern flank with an increased number of jets and carrier strike groups, as well as with submarines and combat ships deployed on a permanent basis.

Further support to Ukraine will include anti-tank air defence systems and drones, which “are proving extremely effective,” Stoltenberg said, as well as cyber security assistance, financial and humanitarian aid.

The leaders have tasked military commanders to work on plans, and the final operational details are set to be decided at the next NATO summit, to be held in Madrid in June.

Earlier on Thursday, Ukrainian President Volodymyr Zelenskyy addressed NATO members and called for the alliance to provide unlimited aid to balance the battle against Moscow.

Responding to a question by Al Jazeera’s diplomatic correspondent James Bays on whether NATO’s commitments matched the requests put forward by Ukraine, Stoltenberg declined to provide operational details but insisted that the alliance was providing substantial help.

The heads of state and government also called on China to refrain from providing “economic or military support for the Russian invasion” and to join much of the rest of the world in condemning the war.

In his address to NATO, Zelenskyy accused Russia of having used phosphorous bombs on civilians. While not commenting on whether the alliance had collected evidence in this regard, Stoltenberg expressed concern at the possible use of chemical, biological or nuclear weapons, which “would change the nature of the conflict” and “have wide consequences” beyond the borders of Ukraine.

“There is a risk that it will affect people living in NATO countries because we can see contamination and the spread of chemical agents into our countries,” Stoltenberg said. “This highlights the need to end this war immediately because this is a dangerous situation.”

Stoltenberg reiterated NATO’s support for Ukraine and for other partners at risk, including Georgia and Bosnia and Herzegovina, but stressed that the alliance has “responsibility to ensure the conflict does not escalate” beyond Ukraine’s borders into a full-fledged war in the European continent.

“We are concerned … because we see Russia is trying to create some kind of pretext accusing Ukraine and NATO allies of preparing to use chemical and biological weapons. We have seen this use of a pretext to do the same themselves,” Stoltenberg said.

Bart Szewczyk, a senior fellow with the German Marshall Fund think-tank, told Al Jazeera the response by Western countries to the war in Ukraine was an illustration of a “unified West in action.”

“It’s quite remarkable how things have been put together,” Szewczyk said. “NATO allies have provided a tremendous amount of support which is partly why Ukrainian forces have been able to resist and heroically perform on the battlefield. This aid is not going to stop until Ukraine will prevail.”

Commenting on the measures put in place to respond to a potential chemical attack, Szewczyk said Stoltenberg’s words made it clear that “NATO allies and partners are preparing for this unthinkable scenario.