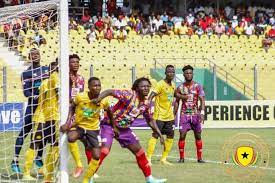 Accra Hearts of Oak once again won the just ended Kotoko vs Hearts President Cup 2022. The event took place on Friday 4 March 2022 at the Accra Sports Stadium, They beat their arch-rivals Kumasi Asante Kotoko by 2 goals to 1 scoreline at about 1800hrs.

Historically, the Presidents Cup is organised by the Ghana League Clubs Association(GHALCA). This is to honour the sitting president and President Nana Akufo Addo was in attendance for this year’s event.

Kumasi Asante Kotoko has won the trophy 7 times and Accra Hearts of Oak just won for the 5th.

From the onset, Both teams exhibited brilliant ball possession and control. As usual, the Kotoko vs Hearts President Cup was once again characterised by physical agility between the two teams. Sulley Aliu Muntari was the first to miss a narrow chance from a long-range.

In the 49th minute, Afriyie Baniyie opened the scoring for Hearts with a wonderful left-foot strike. He converted a corner kick taken by Obeng Junior to a beautiful goal. It was an amazing strike from the centre edge of the 18-yard box.

Attacking pressure was mounted from both sides, coupled with multiple dangerous counterattacks. Then in the 75th minute, The Phobians committed a terrible defensive error.

The central defender, Alhassan, decided to trap the ball at a dangerous position. He missed out on that chance just near the 18-yard box. Samuel Boateng of Kotoko was there in time. Much quicker and stronger, he utilised the opportunity to seize the loose ball and bypass Alhassan. With a strike, Samuel Boateng who came on as a substitute scored the equaliser for Asante Kotoko.

As if by design, Kumasi Asante Kotoko also committed a similar blunder while on the attack by missing out on the ball. Hearts of Oak trapped the ball at the edge of their 18-yard box.

With a calculated through-pass from the mid-field, Parick Razak receives the ball at the centre line. He broke through an offside attempt and paced on. With a dashing speed, he by-passed the goalkeeper and scored. He recorded a late winner for Accra Hearts of Oak.

Kumasi Asante Kotoko is currently 1st on the Ghana Premier League table with 40 points and Accra Hearts of Oak is 7th with 26 points. check the full standing here.

Watch the video highlights below: