Ghana hosted her 1st Edition of the Ghana Raggae for Life Fest’ few days ago. 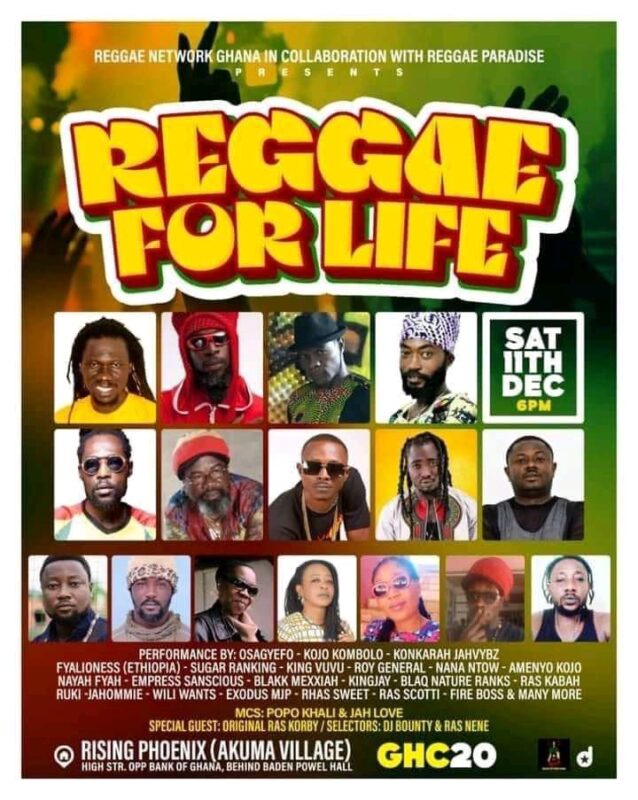 Events popping up amidst the new omicron variant news in the country with adequate protocols observed, Just this past Saturday on the 11th of December 2021. Rising Phoenix (Akuma Village) on high street Opposite Bank of Ghana, behind power Hall.

The beautiful and welcoming performances by the artistes were overwhelming, and to mention the great outcome of the number of attendants.. Couple with media entities came through and facetv news showed much great attentions as Ranking Family Multimedia staffers and fans turned up so large.

The crowd gave a sensational happiness when their favorite artistes showed up in the event. Internacional artiste from Ethiopia fyah lioness gave an outstanding performances with her unique dancehall reggae moves. She’s a Caribbean by birth and she shared stages with famous raggae artistes Freddie mcgregor, yellow man and legendary stranger cole. Respects to the Ghanaian dancehall reggae Ras Jimi Opetekwe who started the music life here in Ghana and also much thanks to adikis pub, Boston gardens, Ras Selekta myke fyah. Not to mention her mentor Paul Gale who had her a microphone telling her she could climb the stage. “Reggae music chose me and I chose it back” Her very 1st performance was encouraged by the legendary reggae drummer wadigad from jahpandis which is in California, usa. One of the songs that she performed was “yuh think yuh bad” with such great energy coming from her and the crowd never stopped excitement and much more appreciated

Raggae music chose me and I chose if back

Affum Kwame Bekoe Gideon Aka Nature Ranks was born to the Bekoe family. His music Journey started from the House of Music, Accra where he picked inspiration from the Legendary Sugar Ranking who was one of the early birds that made a tremendous impact in the evolution of the Ghana music industry.

Roy Brown Mukoro, Former Funkyboy Roy this time Madcap Roy General .. Is a Ghanaian and Nigerian born, His Father is from The Delta State of Nigeria Warri to be precise. And mum from the Eastern region of Ghana, Asamankese .. He’s been in the music and arts from infancy during the good old school days in Ghana right from primary to Senior High School. His career music started professionally from 1997 then he was known with his music group Lyrical 419 late 90s to Early 2000s.. So he later presented himself to the African industry as the Funkyboy Roy. He’s been on stages with almost every big star in Ghana. he’s one of the pace setters in the Ghana showbiz his performances